Sugar Plumps (or S.P. in letters) is one of few background characters. She is first seen soon after the beginning of the game. The player is often sent letters from Sugar Plumps, the first of which is an introduction letter. Sometimes requesting certain items, such as fireflies, or a broken magnet, but most of the time they are simple letters. It is later revealed through one of her letters that she actually lives right next door to the player. She even sends curtains for the Little Inferno that are "Fire Proof". Unfortunately, Sugar Plumps becomes obsessed with her Little Inferno, and is caught in a fire which quickly consumes her house. In her last letter, she begins writing symbols instead of words. There is an explosion which causes cogs and machinery to fall down the chimney, and damage the curtains. While this is happening, Sugar Plumps can be heard screaming. Later, The Weather Man reports Sugar Plumps's house has burned down, and that Sugar Plumps has "died" in the fire. 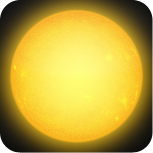 Later in the game, a letter is received from a character who cannot be seen (besides the eyes). The letter says that it is too bright, and asks for the player to send them sunglasses. After sending them, the character will briefly ramble about the style of the sunglasses, eventually trailing off at the letters end. The letter later tells you that "It is time." More letters from this character will be sent from this point on, telling you to burn the four items that you have sent to Sugar Plumps over the course of the game, and always ending with "It is time." which basically means it's time to burn down your house.

Near the end of the game, a letter is received directly from the mail man. The letter is from Sugar Plumps, who reveals that she did not die in the fire; she simply left the burning house. She is now on a beach somewhere, seemingly all grown up, and ends her final letter advising the player to move on as well. She simply ends the letter with S.P, meaning Sugar Plumps.

She sometimes has the word P.S In a few of her mails, but when you get the second catalog, she adds P.P.S.